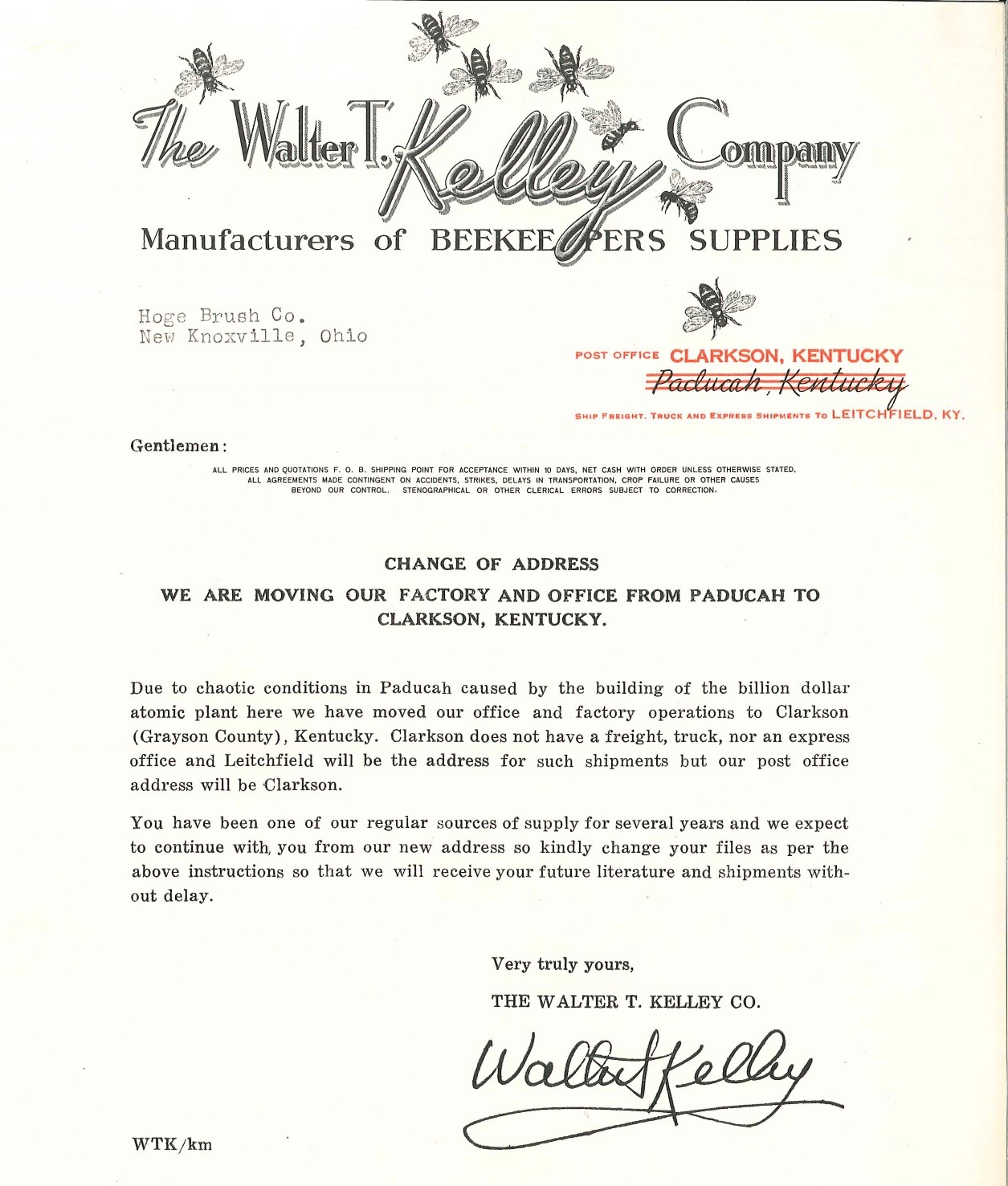 Here's another surprise from the Hoge Brush Company files: a letter from the Walter T. Kelley Company, a Kentucky-based vendor of beekeeping supplies. This somehow feels akin to the earlier letter we saw from a chicken coop company.

It's not clear from the letter what sort of business Hoge and Kelley were doing, but beekeepers use brushes, so I suspect that was the basis for the two companies' relationship.

I love the letterhead design. And look how they used those three horizontal red lines to indicate that they're leaving Paducah and moving to Clarkson — even the cross-out is nicely designed!

The letter explains that the company is being forced to move "due to chaotic conditions in Paducah caused by the building of the billion dollar atomic plant here." That is an apparent reference to the Paducah Gaseous Diffusion Plant, a uranium enrichment facility. There's some additional info here. The plant opened in 1952, so the letter, which is undated, was presumably sent out around that time.

This is the part where I'd usually say, "The Walter T. Kelley Company is no longer in business." But it turns out that Kelley is still an ongoing concern. Not only that, but they're still located in Clarkson, where they had relocated due to the "chaotic conditions" in Paducah. Their website's "About" page includes the following:

In the late 1950s [I think they meant 1940s — PL], the federal government announced a half-billion dollar atomic plant would be located in McCracken County, on the site of the Old Kentucky Ordinance Plant, not far from Paducah. With labor talent in short supply, [Walter T. Kelley] began construction of a new manufacturing plant in Grayson County and in November 1952, an office/shipping structure and factory buildings were erected and ready to be equipped with production machinery. So with his semi-truck loaded, Mr. Kelley moved the factory’s goods 160 miles to Clarkson, KY, where it resides today.

Interesting that the change-of-address letter refers to the plant as a "billion dollar" initiative, while the website says "half-billion." Perhaps, as is so often the case with government projects, this one had some cost overruns.

Kelley, incidentally, still offers brushes. It's not clear who now supplies them.