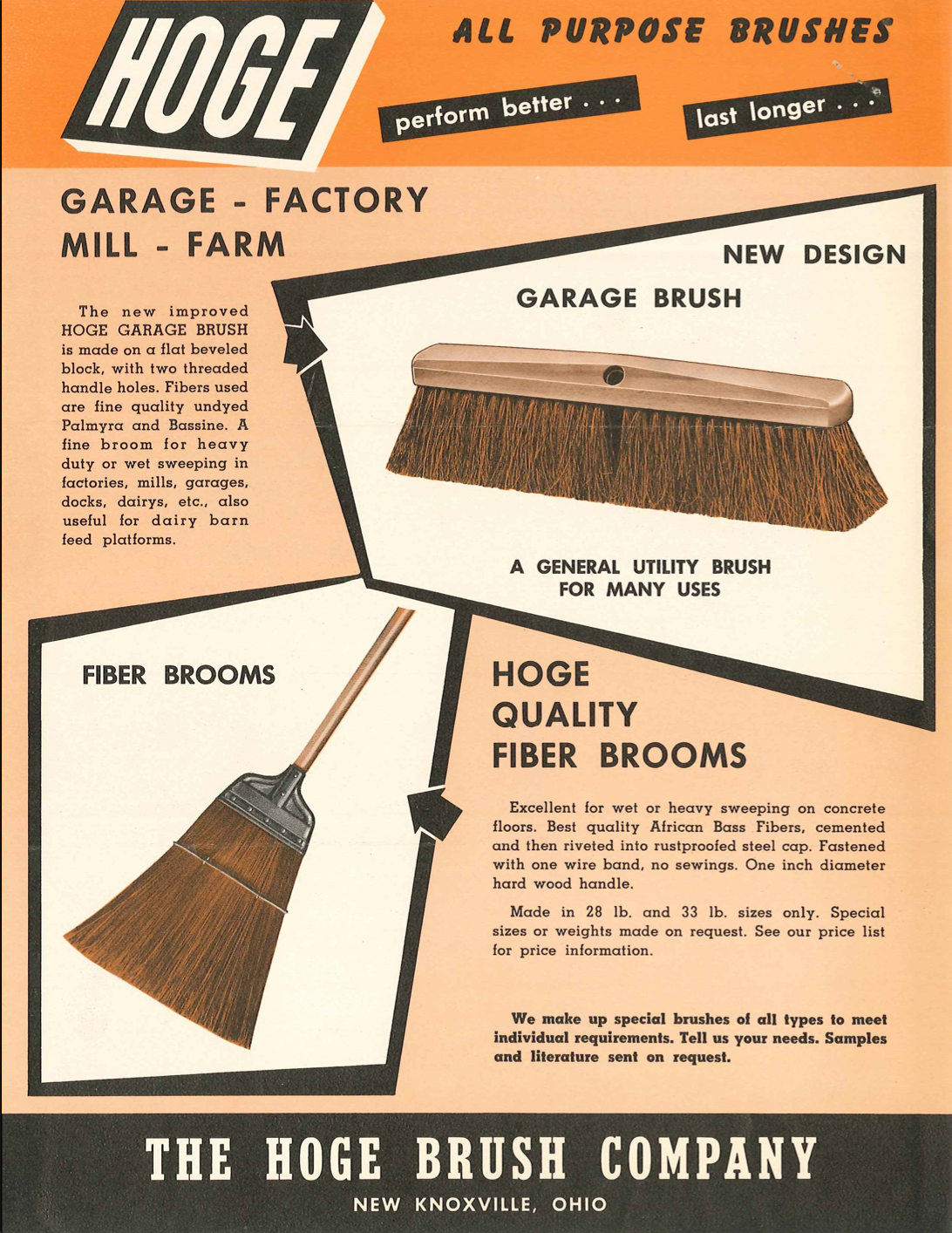 David Zwiep works for the Hoge Lumber Company in New Knoxville, Ohio. Hoge recently decided to sell a building that used to house a division called the Hoge Brush Company, which specialized in brushes, brooms, and so on (see flier above, from 1956), and David was tasked with cleaning it out. Along the way, he encountered lots of old paperwork, much of it on beautiful letterhead. He kept some of it and shared it with his daughter, Joanna Zwiep, who in turn has shared it with me.

Joanna thought I'd be interested in the old letterhead designs, and she was right — many of them are spectacular. But I also found myself intrigued by the letters themselves, most of which are from representatives of other brush-centric companies looking to sell broom handles, purchase brush bristles, or whatever. There's something about the brush industry that I find oddly endearing — a combination of specificity and banality, perhaps. In addition, for the most part we no longer make brushes and brooms in America, so the letters are a peek into a bygone industry.

Joanna has sent me over a dozen of these letters. Rather than present them all at once, I'm going to parcel them out one at a time and create a little series out of them. We'll begin today with this very simple letter from 1944, sent by the Mersman Bros. Corporation of Celina, Ohio (click to enlarge): 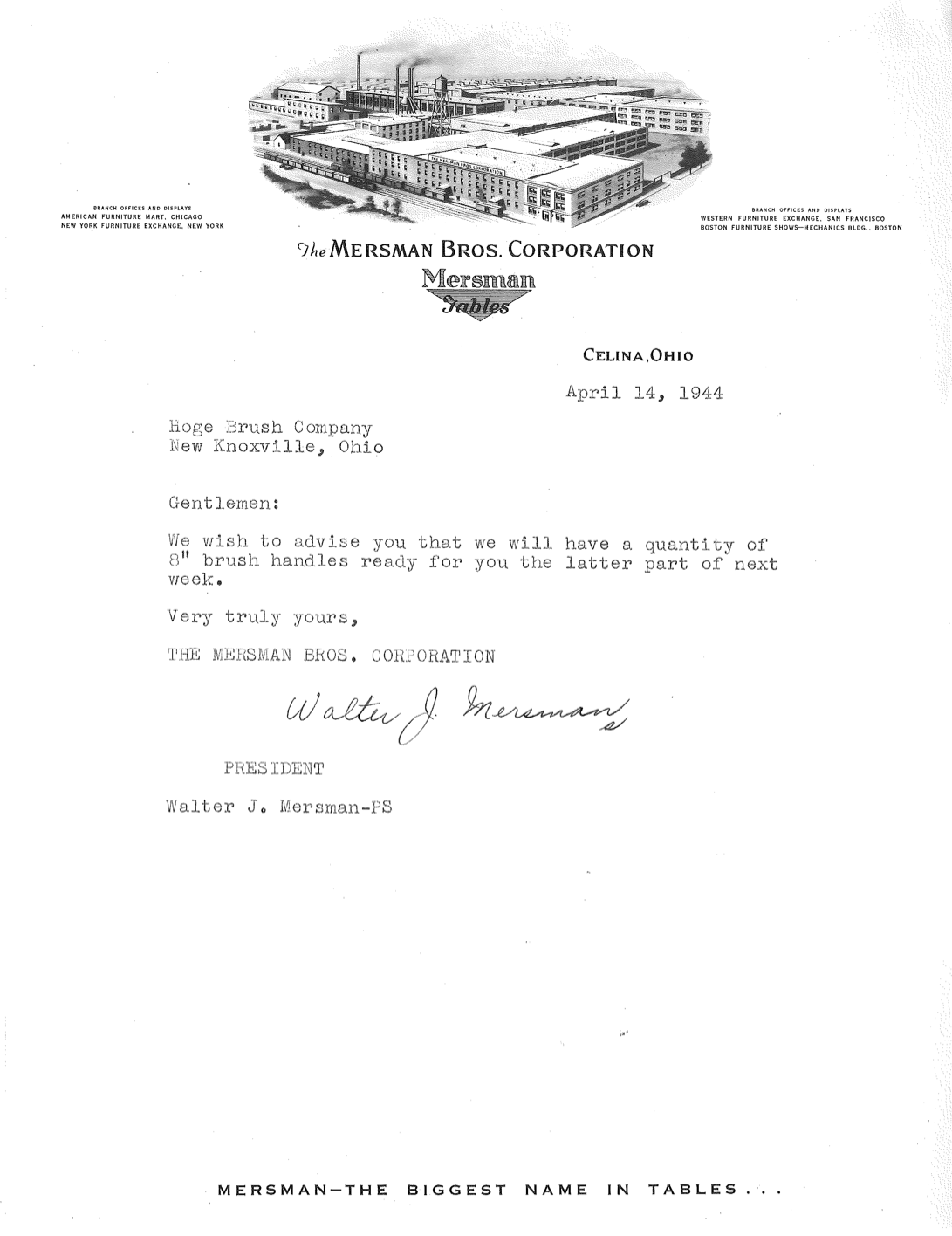 There are lots of interesting bits here. One thing at a time:

• Mersman Bros. is no longer in business. But during their heyday, they lived up to the slogan at the bottom of the letter: "Mersman — The Biggest Name in Tables." The man who signed the letter, Walter Mersman, was the son of the founder, J.B. Mersman, who began making tables in Ohio around 1876. There's a good recap of the company's history here, and many Mersman tables can be found on eBay. It's not clear why Mersman was making brush handles in 1944, but it's worth remembering that most American factories had shifted to wartime production during World War II, so Mersman's normal production routines (and Hoge's, for that matter) were probably affected.

• The factory plant at the top of the letterhead, complete with the smokestacks, is so mid-century perfect, presenting the image of bustling production and industry.

• The fine print at top left refers to the "New York Furniture Exchange." I've lived in New York for nearly 30 years and had never heard of this, so I Googled it and learned that 200 Lexington Ave. in Manhattan — a building that occupies the block between 32nd and 33rd Sts. — houses a bunch of showrooms open to buyers in the furniture and design trade. Designed by the skyscraper architect Ely Jacques Kahn, it was built in 1926 and called the New York Furniture Exchange, but since 1981 it has been known as the New York Design Center (which I had also never heard of, although it seems like the sort of place I should have been aware of). A lithograph showing the building's exterior, made by the printmaker Louis Lozowick, is in the Smithsonian Institution's permanent collection.

• The conventions of mid-1940s communications seem pretty odd today, don't they? This letter advises Hoge Brush that the brush handles will be available "the latter part of next week." But the date of the letter — April 14, 1944 — was a Friday. Assuming the letter was mailed that day, it probably arrived at Hoge's offices the following Monday, which means the brush handles would actually be available toward the latter part of that week — or, in other words, in a couple of days. Obviously, email wasn't available in 1944, but why not just pick up the phone? Seems like that would have been more efficient. (For that matter, Celina and New Knoxville are only 18 miles apart. Mersman could have sent an errand boy to deliver the message in person and had him back in the office the same day.)

That's it for this installment. I'll have more Hoge Brush correspondence soon.

(Special thanks to Joanna and David Zwiep for sharing these materials with me.)

A programming note: You may have noticed that I posted much less frequently than usual this past autumn. Part of that is because I've been busy (in case you're not aware, here's a new project that's been taking up some of my time), but it's also because I've become somewhat bored with aggregating existing news stories that have already been reported elsewhere. It's much more satisfying to post entries that break new ground — like this series about the Hoge Brush Company files — instead of repackaging the latest news report about a message in a bottle or whatever.

I'm not saying I'll never do posts on things that have been reported elsewhere (the recent post about long-lost letters to Santa, for example, was really fun, even if I was rehashing other people's reporting). For the most part, though, I'm going to try to keep PermaRec focused on original storytelling. I know this will be more rewarding for me, and I hope for you as well.