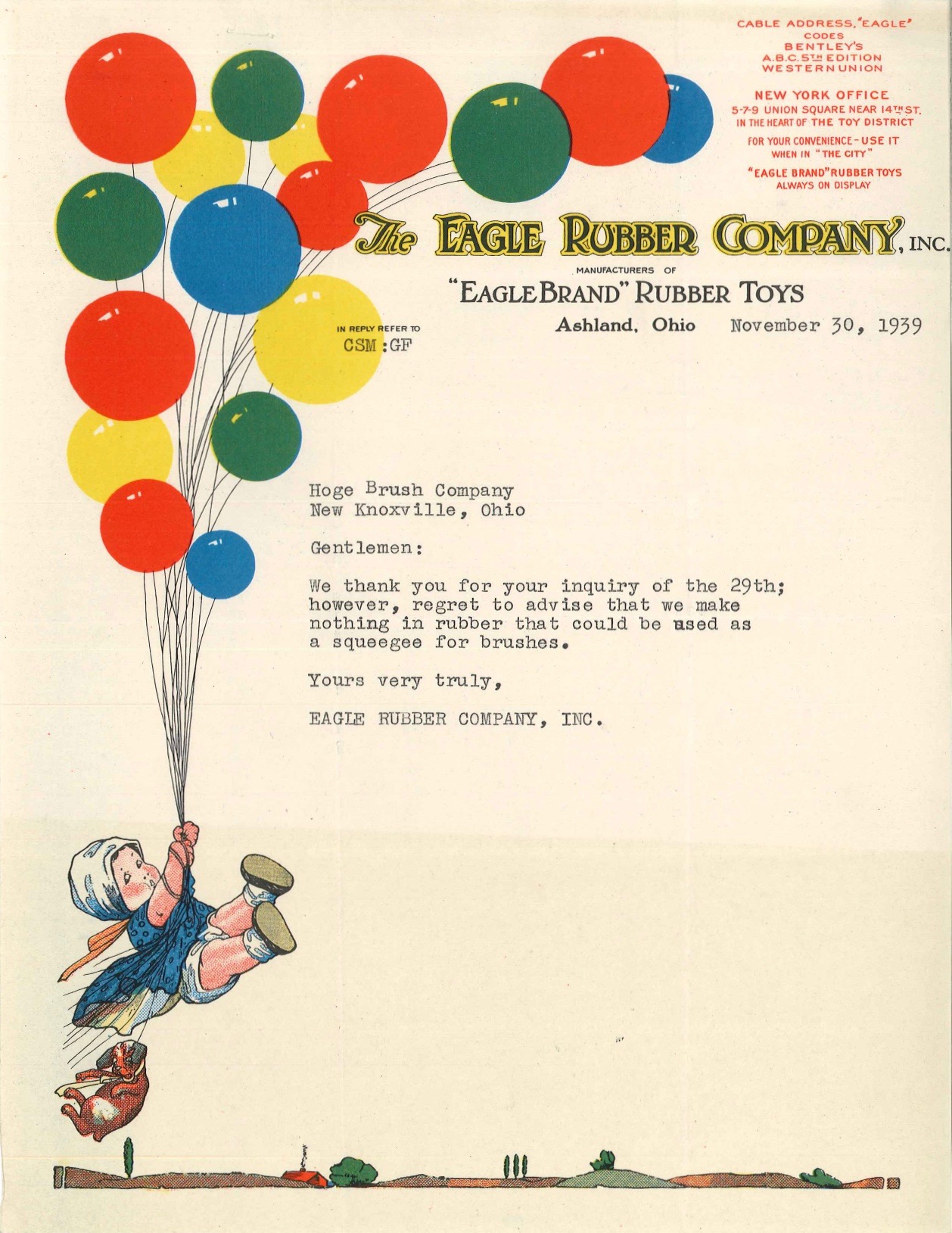 In an earlier installment of the Hoge Brush Company Files, we looked at a letterhead design that featured a gratuitous look at a girl's backside. The letter featured in today's installment also features a hint of a girl's underside, but this one seems much more innocent. What a sensational design!

This is the part where I usually say, "The company that sent the letter is no longer in business." But the Eagle Rubber Company of Ashland, Ohio, is still with us — sort of. The company went through a lot of permutations and is now considered part of the lineage of an Ashland firm called Hedstrom Plastics. According to this page from Hedstrom's website, it's no coincidence that Eagle featured balloons on its 1940 letterhead design:

Eagle Rubber Company started in a small garage on Orange Street [in Ashland, Ohio] in 1913. A few employees turned out thousands of balloons using makeshift equipment. ... The company spawned an industry that led to Ashland becoming the balloon capital of the world.

By 1985, Ashland's "balloon capital" status was somewhat in doubt, mainly due to foreign competition. It appears that toy balloons are no longer manufactured in Ashland today, but the town honors its balloon-driven heritage with an an annual Balloonfest event, which focuses more on hot air balloons than toy balloons. The event's history is explained in this brochure:

In the 1960s, Ashland wanted to celebrate its status as balloon capital of the world — a name they earned because in those days 70 percent of the world’s toy balloons were manufactured in Ashland — with a Balloon Festival. The first Balloon Festival took place in 1963, complete with balloon parades, a carnival, and a balloon queen pageant. ...

A number of other activities at the event celebrated toy balloons and their production, but the one that inspired the current festival was the hot air balloon ascension from Brookside Park. The balloon lifted off with six people, but only went about a quarter of a mile because the weather was not conducive to flying. Another balloon festival took place the next year, and then, the festival was incorporated into the sesquicentennial celebration of 1965.

In 1990, the idea of hot air balloons was brought back to Ashland during the city’s 175th anniversary as an ode to the events in the ’60s. About 19-20 balloons were brought in for a one-day festival that had beautiful weather. Residents of Ashland enjoyed the event and asked for it back for an entire weekend.

Less than one year later, however, Hoge Brush was looking to purchase some balloons. So did they go back to their friends at Eagle Rubber? No! Instead, they went to another Ohio firm — the Anderson Rubber Co., of Akron — as seen in this letter (click to enlarge): 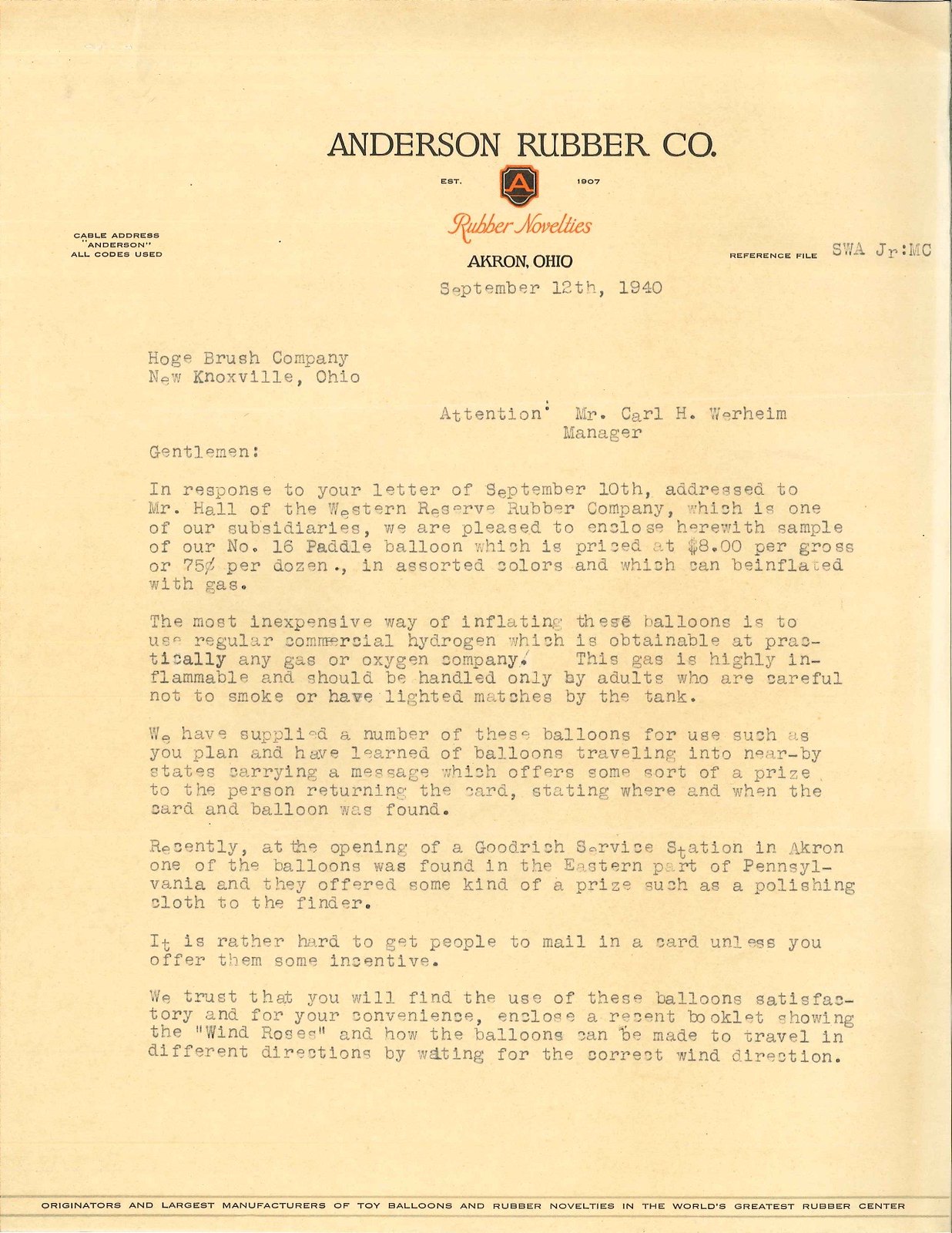 Akron, of course, was a well-known rubber manufacturing town. Several tire manufacturers were located there, including Goodyear, which is still headquartered there today. The local football stadium — which had just opened in 1940, the same year that Anderson Rubber sold balloons to Hoge Brush — is called the Rubber Bowl. All of which explains the little tag line at the bottom of Anderson Rubber's stationery: "Largest Manufacturers of Toy Balloons and Rubber Novelties in the World's Greatest Rubber Center." So while Ashland may have been the balloon capital, Akron was the de facto rubber capital. (The two towns are only about 50 miles apart, making north-central Ohio a very rubbery place back in the day.)

Anderson Rubber, alas, does not appear to be in business today. The company's third-generation president, S.W. Anderson III — grandson of the company's founder — died earlier this year.

Meanwhile, did Hoge Brush ever locate a source for squeegees? Yes — from yet another firm, W.J. Dennis & Company of Chicago (click to enlarge): 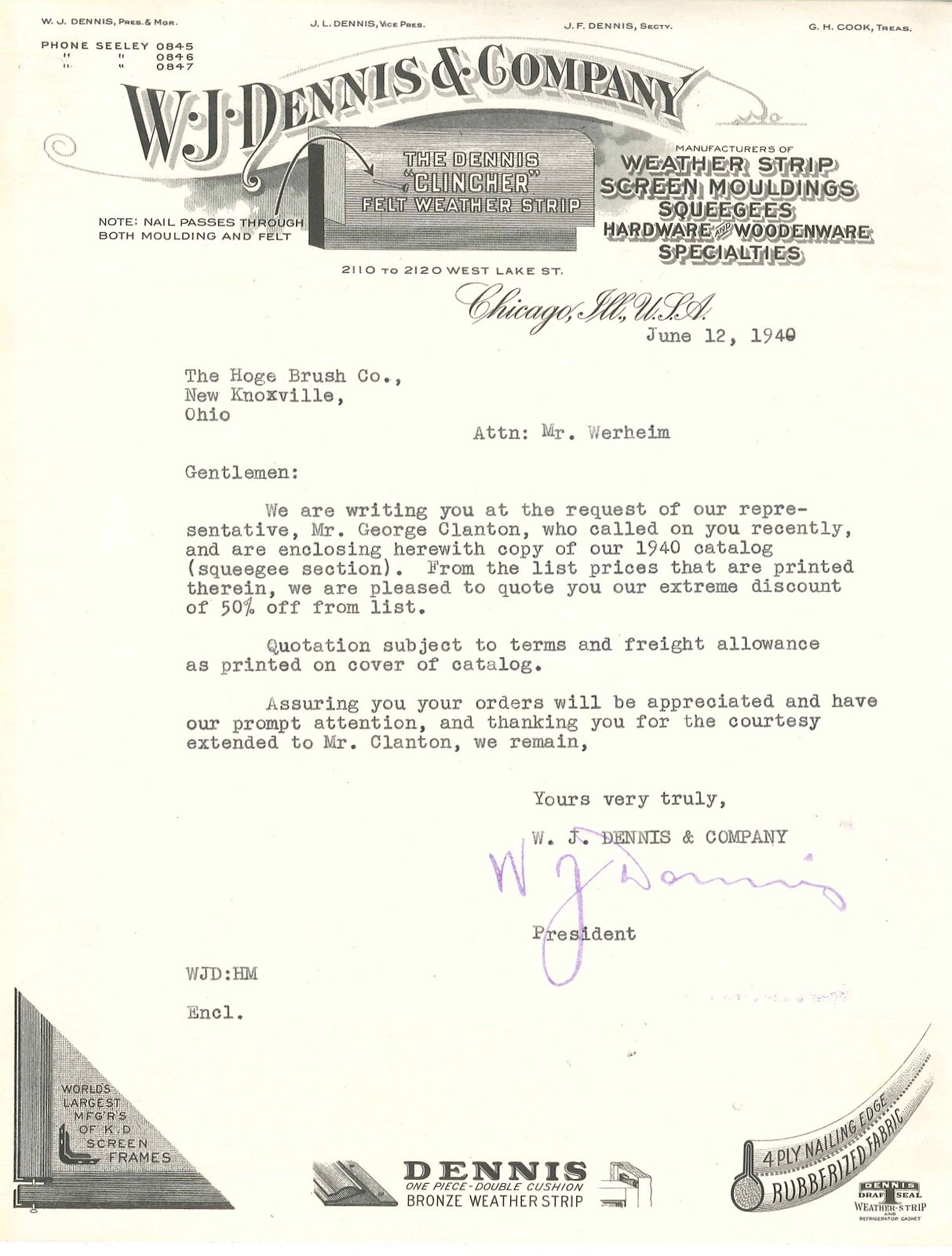 As you can see, the letter was accompanied by a "copy of our 1940 catalog (squeegee section)." Here is that catalog (if you're reading this on a mobile device and can't see the slideshow below, click here):

W.J. Dennis still exists. And get this: They still make squeegees.