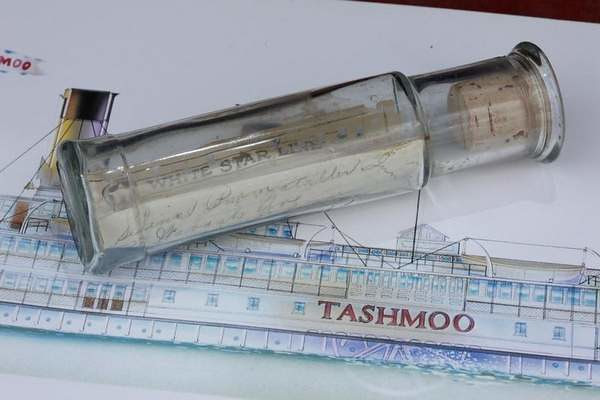 What have we here? It's a bona fide message in a bottle! The note was written 98 years ago ago by two Detroit residents named Selina Pramstaller and Tillie Esper. They put the note in the bottle and dropped it in the St. Clair River just off of Harsens Island, which was once the site of a popular Detroit amusement park.

The idea behind a message in a bottle, of course, is that it'll float away and be discovered by some distant stranger (like the one I wrote about last year). But this bottle didn't float off — it just sank to the bottom of the river, where it was recently discovered by a recreational diver named Dave Leander.

Leander soon connected with a local historical society that's now trying to track down the descendants of the two women who wrote the note (no success yet, but they've already found a fair amount of information on the women themselves, so I suspect tracking down a relative should be feasible in the not-too-distant future). You can read more about all of this here.

(My thanks to James Poisso and Taha Jamil for letting me know about this one.)

Email ThisBlogThis!Share to TwitterShare to FacebookShare to Pinterest
Labels: Messages in Bottles