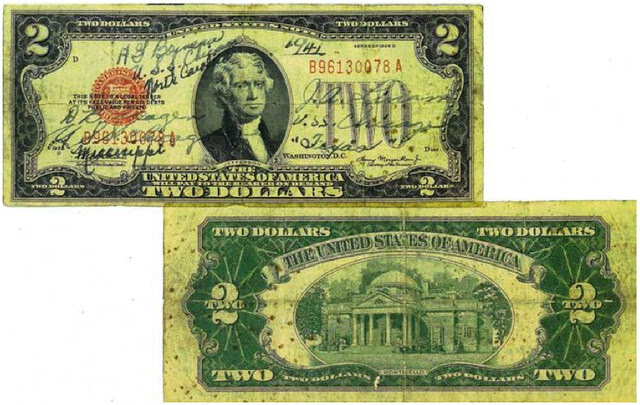 Heather McCabe runs a great website called Two Buckaroo, which is a running celebration of our most inconspicuous piece of currency: the $2 bill. The site primarily documents her experiences as she spends $2 bills and chronicles the reactions she gets — sometimes amused, sometimes annoyed, always interesting — from cashiers, bartenders, checkout clerks, and so on. But sometimes she'll also run posts under the heading "Twos in the News," rounding up recent news items relating to $2 bills. And one such news item that she recently found, although it dates back to last summer, is right in Permanent Record's wheelhouse.

Here's the deal: Thirty-some years ago, a Milwaukee woman named Nona Diamond acquired a 1928 $2 bill (see above), which she squirreled away in a safe deposit box. Last summer Diamond's daughter saw the bill for the first time and noticed that it was inscribed with the words "USS Chicago," "1941," and three signatures, one of which was legible — "Jesse Linam." She Googled the name and tracked down Mr. Linam, who was still alive at the age of 93. He had served on the USS Chicago during World War II, along with the other men whose signatures appear on the bill. He asked if he could have the bill back, and the Diamonds happily sent it to him.

Tracking currency as it moves in and out of people's lives is not a new phenomenon, of course. You may have seen $1 bills (or occasionally other denominations) stamped by people participating in the "Where's George?" project, which was founded in 1998 and uses serial numbers to track bills as they circulate around the nation (click to enlarge):

Personally, I've never participated in "Where's George?" (it seems like a dangerously deep rabbit hole for someone as obsessive as I am), but I've always loved the idea of it. Pundits have been predicting a cashless society for decades now, but I'm hoping currency and coins stick around. They are, essentially, artifacts that we all get to share.

Email ThisBlogThis!Share to TwitterShare to FacebookShare to Pinterest
Labels: Notes Written on Currency, Who Owned This Object?